Replace the old stone bridge that was swept away in a storm. Minimize the risk of future flooding, allow people to see the landscape clearly and include traditional stonework. And minimize the construction's impact on the river.

The lower nickel content of Forta LDX 2101 means one can achieve a more predictable and lower cost than with other types of stainless steel. Another factor in favor of duplex stainless steel is its aesthetic appeal and corrosion resistance, which means the bridge will not need any repainting. This reduces Life Cycle Cost and eliminates the need for sandblasting and repainting over the river: an important point in a National Park.

When its historic stone bridge was swept away in a storm in December 2015, Pooley Bridge lost part of its identity, as well as a vital road link. The village is named after the original protected bridge, which was built in 1764 with three traditional stone arches. Although the arches were much loved, their stone piers restricted the flow of water during the storm, causing water to back up and flood villagers’ homes. It also created enough pressure to scour the riverbed under the piers, ultimately washing away the bridge. Once the storm subsided, Cumbria County Council wanted a new bridge that would be welcomed by the community. It appointed specialist bridge designers Knight Architects to create a fitting design through a consultation process with the community.

Hector Beade Pereda, Head of Design at Knight Architects, led the project. He said: “We didn’t have a specific idea in mind when we started. We asked residents open questions about what the bridge meant to them and we shared a presentation to help them understand bridge design and the constraints we faced.

“We found that local people wanted to minimize the risk of future flooding, to be able to see the landscape clearly and to include traditional stonework. We also needed to minimize the impact of construction on the river.”

Knight Architects put forward three design options with possible materials including stainless steel, painted carbon steel, weathering steel, concrete and stone. The locals shared a preference for the design with the lowest visual impact and for materials that would age naturally with little or no maintenance.

We chose duplex stainless steel as it is at least 25 percent stronger than S355 carbon steel, giving us the ability to create something as slender as possible

Beade says: “Using this feedback, we progressed with one design based on a composite arch made from stainless steel and reinforced concrete. While weathering steel would have matured well, we chose duplex stainless steel as it is at least 25 percent stronger than S355 carbon steel, giving us the ability to create something as slender as possible.”

This was important from an aesthetic point of view to help the bridge appear transparent so that people can see the landscape through it. The slender design also allows the river to flow freely and avoids backing up during storms. The duplex steel is also more tolerant of impacts by debris when the river level is high and flowing fast.

Beade says: “At the last session with the community, we presented a physical model based on a contemporary design. We had carried out extensive structural design at the conceptual stage with Mott MacDonald as we wanted show something that was achievable. After that, we proceeded to the detailed design phase and consulting engineer GHD worked hard to push the duplex stainless steel to its limits and make the bridge as slender as possible.”

“It’s a sophisticated design from a structural point of view and required novel thinking from GHD. Usually, a bridge’s concrete deck sits on top of steel beams. However, in this case, the deck is supported by a steel and concrete arch structure, with the sides of the concrete arch connecting with the steel framework.”

In addition, the ground conditions meant that the bridge could not transfer horizontal reactions into the ground. Instead, the structure continues inside the abutments to pass the horizontal component through the arch, with the compression of the deck acting as a tie.

Light weight was also important for straightforward construction. Contractor Eric Wright Civil Engineering was able to move the entire bridge into place with a single lift without need for a temporary support structure in the river. This minimized the impact of construction on the river.

Another factor in favor of duplex stainless steel is its aesthetic appeal and corrosion resistance, which means the bridge will not need any repainting. This reduces Life Cycle Cost and eliminates the need for sandblasting and repainting over the river: an important point in a National Park.

The lean duplex grade of Forta LDX 2101 was selected. It contains relatively low levels of alloying elements such as nickel and molybdenum.

Commenting on the grade, Beade says: “Forta LDX 2101 is ideal for river crossings in inland rural environments and temperate climates. The lower nickel content meant we could achieve a more predictable and lower cost than with other types of stainless steel.”

Beade wanted a surface finish that fits with the rural location. He chose a matt finish to resemble galvanized steel, which is used extensively in agriculture. It was achieved after grinding the welds flat then sand blasting the entire surface to achieve a uniform appearance.

Beade says: “What really interests me in stainless steel is its aesthetic durability in terms of how the bridge will look over time. Maintenance is often out of my control as a designer and it’s important to know that a project will look just as good after many years as it did on opening day.”

This is an important point for sustainability as people will feel motivated to protect and maintain beautiful structures.

However, the carbon footprint of structures is becoming a more important design factor. According to a report by engineering consultancy Arup on the future of urban consumption, the construction industry is one of the largest sources of greenhouse gas emissions. This is due to its extensive use of concrete and steel, which can be addressed by the sort of approach taken for Pooley Bridge.

The slender design made possible by the high strength of duplex stainless steel minimized the amount of both the steel and concrete used and their associated embodied CO2 content. .

Outokumpu’s approach to sustainability has also helped to enhance the sustainability of the project. Its stainless steel has one fifth of the embodied carbon of the global average of stainless steel. That’s partly due to using 85 percent recycled content in its steel, but also using low-carbon energy at its production sites. 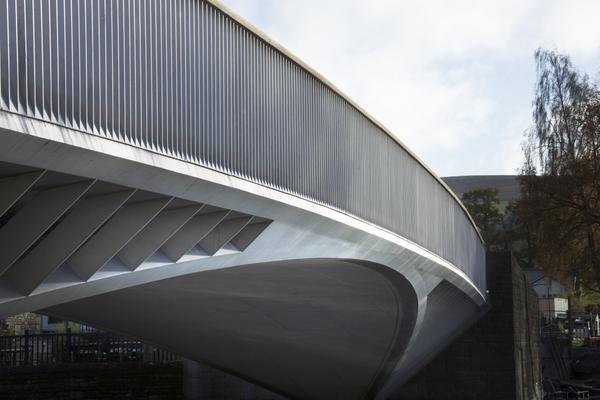 Being the UK’s first stainless steel road bridge presented an additional challenge. Duplex stainless steel is not hard to weld but it does require different techniques to conventional carbon steel. For example, it’s essential to use a suitable weld procedure including a filler wire designed for the material. After final sand blasting of the finished structure, it is important that installation is undertaken with care to preserve the appearance.

These additional requirements mean that only three workshops in the UK submitted tenders for the fabrication project. This would have prompted some clients to switch to an alternative material such as weathering steel to minimize project risk and secure quotes from at least four fabricators.

However, Cumbria County Council’s main priority throughout the project was to deliver the bridge that the community wanted. It was happy to proceed with quotes from three workshops, with WEC in Darwen winning the contract.

Beade says: “That was very forward thinking of the council and was an important factor in us being able to deliver the bridge. The result is that from now on, more workshops will be willing to fabricate in stainless steel and more clients will be able to consider it as an option. We are now confident to include duplex stainless steel in our portfolio of materials.”

A bridge for the community

With local people expressing a wish to include traditional stone features, cladding was used on the abutments, with the pattern reflecting the blockwork of the original bridge. In addition, the community organized a scheme where people could sponsor paviors on the pedestrian paths to have their names engraved and this has strengthened the community connection.

Another area that set the project apart was CCC’s willingness to carry out a risk assessment and approve an unusual system for traffic containment. Like the old bridge, traffic on the new Pooley Bridge is controlled by traffic lights to one direction at a time. That has helped to keep speeds low, making the bridge a good place for local people to play Pooh sticks – a game that relies on being able to cross the road to race sticks in the current.

Knight Architects suggested 300 millimeter kerbs for traffic containment, instead of a traditional impact barrier. Not only does this enable people to play pooh sticks but it also protects the transparency of the design, letting people see the landscape through the minimalist and elegant stainless steel balustrade.

That makes the bridge deck a nice place to stop and enjoy the view, which is also helped by a tapered shape making the bridge deck wider in the middle so that people can stop without blocking the route.

With any replacement bridge, it’s inevitable that there will be comparisons between the old and new structures. Beade says: “The old bridge stood for 254 years so we wanted to design something that will last a long time. Under the design codes, the design life of the new Pooley Bridge is more than 120 years with little need for maintenance and because bridges often last a lot longer than their design life, we’re hoping that the new bridge will still be standing 250 years from now.”