Thousands of bridges worldwide are in need of repair years ahead of their scheduled lifespan. How do we renovate them in a cost-effective way that keeps the bridges safe well beyond our lifetimes?

You know the feeling: brake lights in front of you, a steadily slowing tempo, flashing arrows at the shoulder signaling the road narrows up ahead, lane closed. Just like that you’re at a standstill in traffic, your commute home stretching on, dinner plans on the back burner. You’re not the only one. The average commuter in the US spends anywhere from 38 to 60 hours each year stuck in traffic. While traffic jams are never any fun, congestion due to road construction is especially frustrating when it feels like the construction never ends.

The costs of an aging infrastructure

With an aging infrastructure in many countries around the world, those hours spent stuck in traffic are sure to increase in the coming years. In the US alone, over 200,000 highway bridges need repairs due to corrosion damage, repair work that’s estimated to cost nearly 204 billion euros. * One reason these vital repairs need to be undertaken now stems from the past misconception that during construction, the use of reinforced concrete could combine low cost with durability. Yet as the years have gone by, we’ve seen that under certain conditions – like those found in marine or coastal environments or in regions using road de-icing salts – contamination leads the concrete to break down, losing the high alkalinity that protects carbon steel from corrosion. Bridges that had been built previously with the idea that they would last for hundreds of years are breaking down. In the UK, this happened with the Midlands Links Viaduct, a project that was completed in 1972 for a cost of 63 million euros. Within two years, signs of corrosion were evident and by 1989, more than 128 million euros in repairs were undertaken. By 2010, those renovation costs rose by another 270 million euros. * 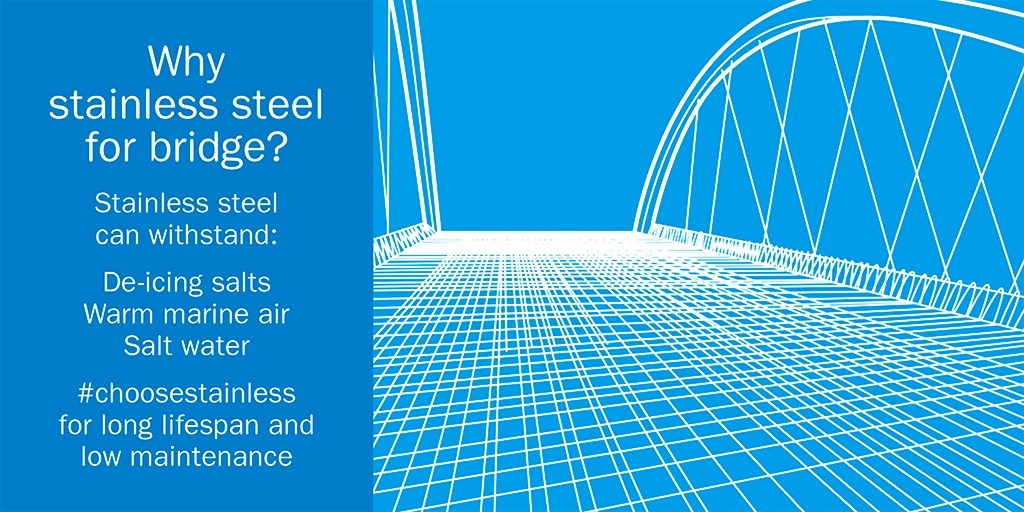 Replacing these bridges entirely is normally out of the question. After all, while we’ve come to rely on the connections they create and the time-saving paths that they have carved, a complete bridge replacement is cost prohibitive. Yet for the Gateway Bridge in Australia’s Queensland, the aim of reducing disruptions and impending cost overrun on renovating work led authorities to decide for new construction in the way of a separate extension. With extensive renovations often the only possibility for others, however, it’s necessary to find a stable, sustainable solution that likewise has a low overall lifecycle cost. Although much attention has been paid to revamping the concrete used, the use of stainless steel in bridge construction should thrive, beating out other materials. Intended for long-life design, stainless rebar is not reliant on concrete for its corrosion protection. It likewise saves on costs and hence taxpayers’ money while minimizing future maintenance requirements. Most importantly, with its built-in corrosion protection, stainless rebar keeps those of us who use the roadways safer longer. Though no bridge can last forever, we can build a strong, resistant bridge that lasts past our own generation, saving on construction – and limiting those hours we spend, thumbing the wheel as we inch along the highway.