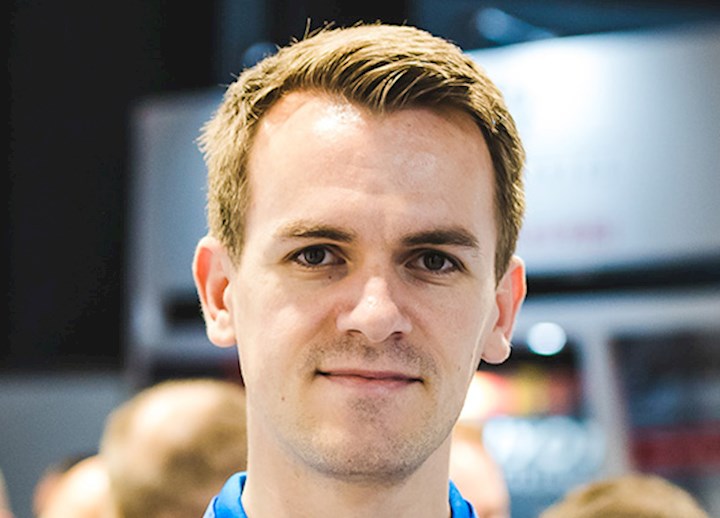 Björn Helmersson explains how corrosion testing can be used to help select the most suitable stainless steel for a specific application.

The outstanding corrosion resistance of stainless steel results from its ability to form a thin, compact and stable surface film, rich in chromium. This film protects the material below the surface, making stainless steel non-reactive in many environments – we say that the material is passive. However, corrosion can occur when the passive film is breached – by chlorides or other aggressive species – or if it is not stable, such as in some acids and bases. To reliably select a material for a given application, we need to know that the material will be compatible with the conditions it will be used in. Corrosion testing plays an important role in ensuring that the selected stainless steel grade will perform well in its working environment.

The aims of corrosion testing

As a material supplier, Outokumpu aims to provide its customers with the best tools possible for cost-effective and reliable material selection. To fulfill this goal, large amounts of corrosion data need to be generated and a suitable test method must be used. A good test method for this purpose should be:

The method that is most commonly used at Outokumpu is called ISO 18069 and utilizes three test periods to assess the material’s response to its exposure conditions.

In real service conditions, activation could occur if the conditions are temporarily more aggressive than usual, or if the passive film is mechanically compromised by abrasive conditions. Including this step during corrosion testing provides an extra safety margin in the corrosion data.

Corrosion data can be presented in a variety of ways. The format used most by Outokumpu is the corrosion tables available in our Corrosion Handbook. Figure 1 shows an excerpt from these tables. Corrosion tables are available for a wide range of media, including inorganic and organic acids, alkaline media, foodstuffs, metals and salts. The tables indicate the expected corrosion rate for a specific steel grade in different environments.

Isocorrosion diagrams are based on the same data as the corrosion tables, but presented as a line that represents a corrosion rate of 0.1 mm/year. This gives an easy to grasp overview of the material’s limits in a range of concentrations. At a temperature below the line, the material is expected to perform well, but at higher temperatures it is no longer resistant.
As an example, if we want to store a sulfuric acid solution of 20 mass-% at 60°C, we could take a look at the isocorrosion diagram in Figure 2. This would show us that Supra 316L/4404 will not be suitable. We will instead have to go for a higher alloyed grade, such as Ultra 904L. 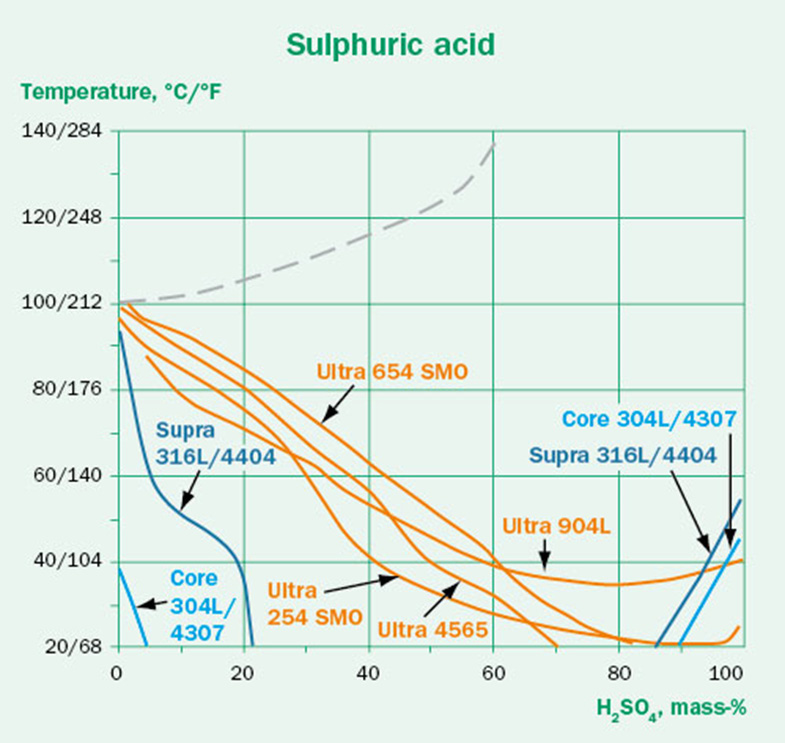 Although a wide range of conditions are available in the Corrosion Handbook, the real world is seldom so simple. Before blindly using these guidelines, we need to consider if there are any other factors that may affect the corrosivity. The tests are performed in pure chemicals at constant conditions. In real operating conditions there may be contaminants, process variations or a different oxygen content. These factors can in some cases be critical to material performance.

The effect of some contaminants on the corrosivity of sulfuric acid are illustrated in the three isocorrosion diagrams shown in Figure 3. The aggressive chlorides in Figure 3B shift the lines towards lower temperatures compared to the pure conditions in Figure 3A, indicating lower corrosion resistance for the respective grades.

In Figure 3C the oxidizing contaminant chromic acid has been added to the sulfuric acid. This contaminant has a clear positive effect and shifts the lines towards higher temperatures. However, as the oxidant concentration increases, the positive effect diminishes. 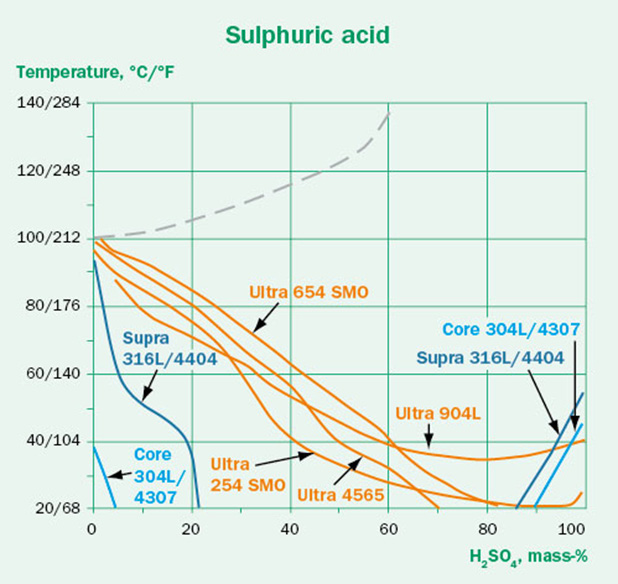 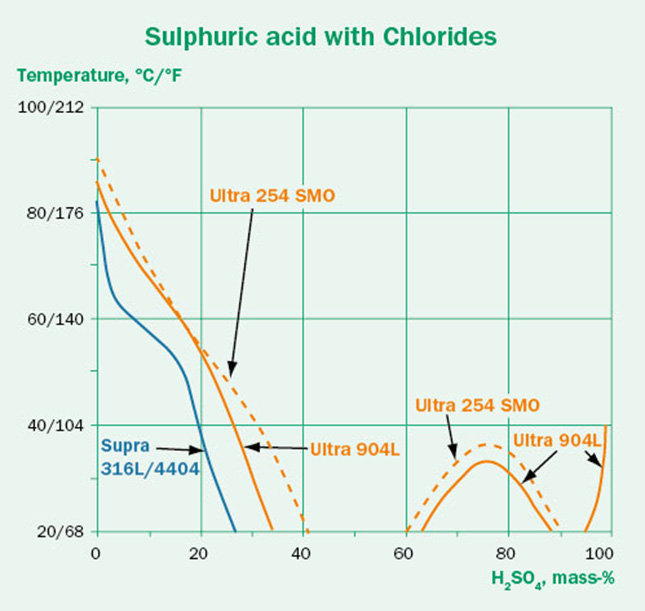 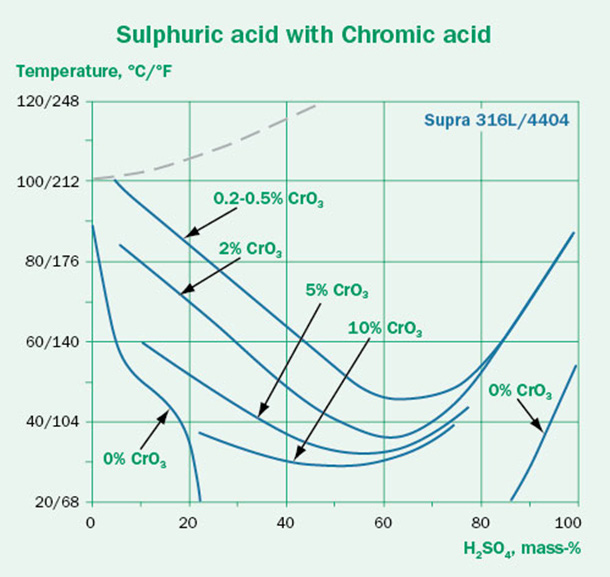 This shows us that the effect of contaminants on the corrosion resistance is not always clear-cut. Some contaminants make the conditions significantly more aggressive. Others may have a positive effect – but even in those cases, a higher contaminant concentration does not necessarily mean better performance. 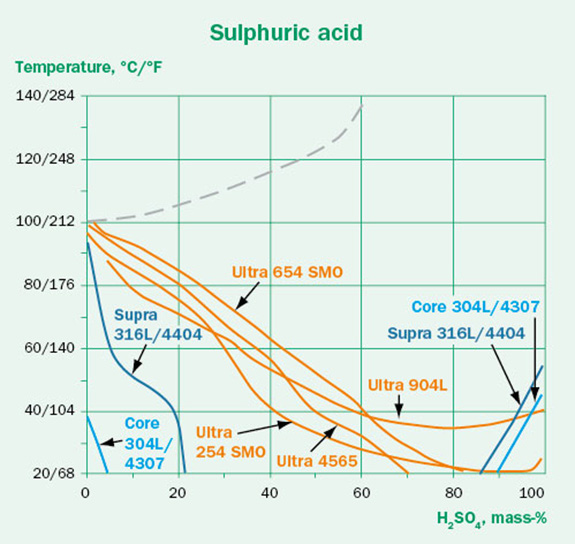 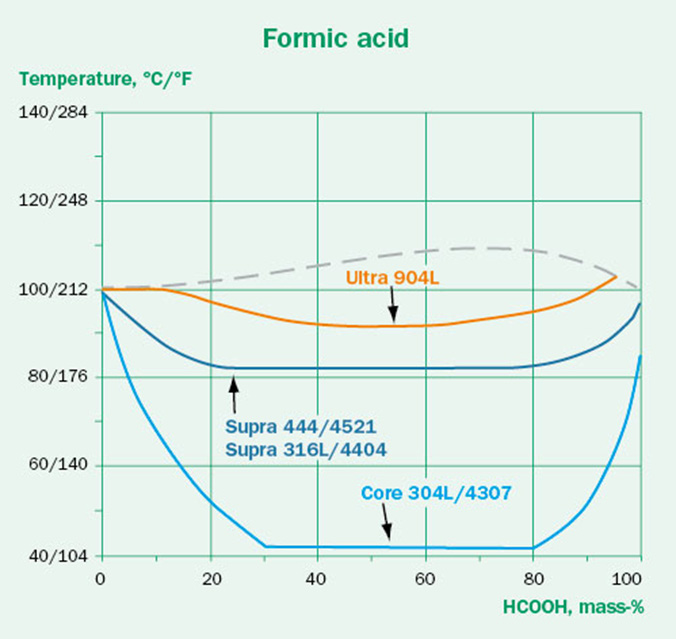 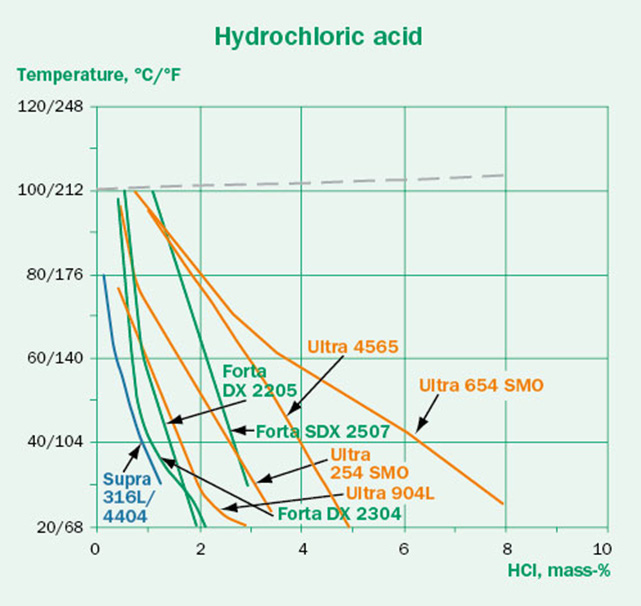 Oxygen content is known to be an important parameter in terms of corrosivity. Generally, a better corrosion performance is expected in conditions with low oxygen contents than in aerated conditions. This is, however, not true in all cases. Figure 5 shows isocorrosion diagrams for Ultra 904L in sulfuric acid, with and without deaeration. While it is obvious that oxygen content has an effect on corrosivity, it is less obvious what this effect will be. As such, oxygen content is an important parameter to consider. All data in Outokumpu’s corrosion tables and isocorrosion diagrams are performed in naturally aerated conditions, unless specified otherwise. 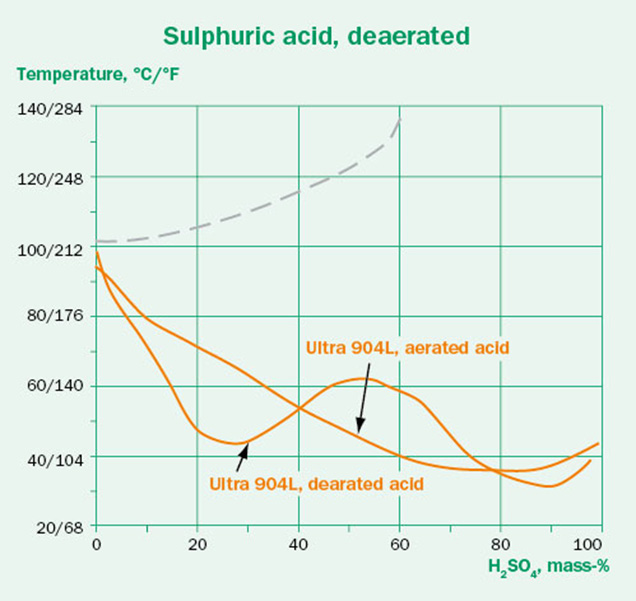 The importance of including all types of corrosion

However, other types of corrosion may occur. In conditions where this is expected, it is indicated in the corrosion tables. For example, contaminants such as chlorides may induce localized attacks like pitting and crevice corrosion. Localized corrosion types follow more complex mechanisms and are more difficult to predict. To deal with these corrosion types another toolbox may be required.

Capturing the energy of light

Crafting the geometry of design

What if cities were greener and cleaner?