The town of Sölvesborg wanted to build an attractive pedestrian bridge that will stand the test of time while protecting a local bird conservation area.

Outokumpu Forta duplex stainless steel was used in the bridge’s main components making the structure nice looking, hard-wearing and kind to the environment.

The eye-catching Sölvesborg Bridge connects the center of Sölvesborg, a tiny city near the southern tip of Sweden, to the new residential district of Ljungaviken Listerlandet. The project leader Stål & Rörmontage was looking to build an attractive pedestrian bridge that would stand the test of time and have minimal impact on a nearby bird conservation area by requiring as little maintenance as possible.

Not only was the 756-meter structure to set the record as the longest pedestrian and cycling bridge in Europe, but it was designed to serve as both an attractive landmark and a key part of the region’s infrastructure for generations. The construction of the Sölvesborg Bridge was completed in 2012. 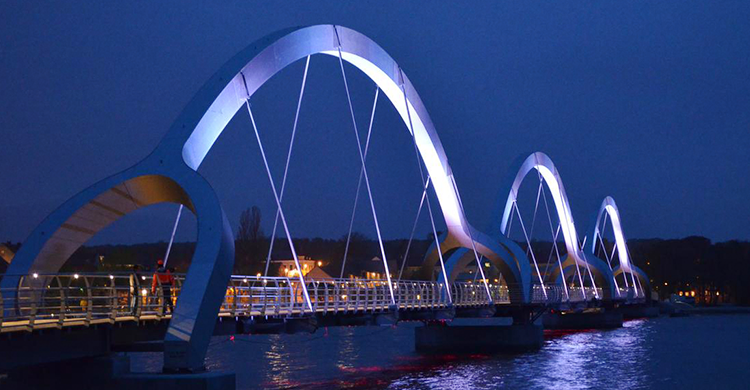 For the engineers, finding just the right construction material was a critical step. The material had to be strong, durable, anti-corrosive and, considering the size of the project, cost effective. Just as important, the solution had to be environmentally friendly and sustainable.

To meet these requirements, Outokumpu Forta duplex stainless steel was selected as its primary construction material. The underlying deck support structure, railings and the three 60-meter arches that give the bridge its distinctive look were built from Forta.

The benefits of the chosen material were particularly crucial from the environmental standpoint. Unlike carbon steel, which has to be repainted every 15 years, stainless requires only minor maintenance. The result is that the Sölvesborg community avoids the impacts of epoxy paint residue and sand blasting on the bird conservation area.

The high strength of duplex stainless translated into an environmental payoff during the building process as well. With less material used overall, the steel production, transport and installation were less carbon intensive.

The bottom line was also an important consideration for Stål & Rörmontage. The duplex they chose has a relatively low nickel content and therefore isn’t subject to nickel market volatility. What really caught the company’s eye, however, was the durability and anti-corrosive properties of Outokumpu’s Forta range. The specific material they used was Forta LDX2101 plate, but the Forta grades in general are ideal for bridges because of their ability to withstand harsh, damp weather conditions for extended periods.

With lower periodic maintenance needs, the life cycle cost of the project dropped. The company estimated that not having to retreat the bridge would save not only the environment, but as much as half a million euros in the long run.

Taking the sustainable path towards building bridges that endure and inspire

Bridge the knowledge gap with our product-specific carbon footprint