The record-breaking Brisbane Gateway Bridge built in 1986 needed an expansion due to increased traffic. The aim was to reach a 300-years life span with only a little maintenance.

The architectural challenge was resolved by using Outokumpu stainless steel bars in two submerged piers. In the long-term choosing stainless steel pays off as maintenance cost stay low during the lifecycle of the bridge.

The Gateway Bridge in Queensland, Australia, is really one of those architectural marvels you have to see to believe. The unique structure of the bridge crossing the Brisbane River was the first of its kind when built in 1986, with a record-breaking main span of over 260 meters stretching between two main piers.

Reaching a height the equivalent of a 20-story building, the four-lane bridge had to be tall enough to allow boats to pass beneath yet low enough to accommodate the flight patterns of the nearby airport. After designers came up with the four-lane solution that connects the eastern suburbs of Brisbane to the city, growth in the suburbs had created an increase in traffic on the bridge.

So in 2005, an expansion and duplication was announced. The already-standing four-lane motorway was increased to six lanes; just a few meters away, a second bridge duplicating the look of the first began to take shape.

Ambition below the surface

Creating a 1,627 meter bridge with fully submerged foundations proved quite the architectural challenge. What made it even more challenging, was the government's request that the bridge maintain a 300-years service life – something that had never been tested before. That's where stainless steel rebar came into play.

To limit the possibility of corrosion and therefore reduce the need for renovations, the bridge includes stainless steel on the two piers that are submerged. Although the price of stainless steel increased the costs upfront, in the end, just 130 of the 7,800 tonnes of steel used in the Second Gateway Bridge were stainless steel, which kept costs low.

The design-life target is a testament to the size and importance of the bridge; it also showed the recognition that although initial costs may be higher, in the long-term, the savings on repairs and extended time the bridge is in use pay off those costs.

When construction finished in 2010, the results were experienced by everyone who used the bridge, with some commuters noting they spent between 10 to 25 minutes less time in traffic. With the stainless steel reinforced piers, those smoother commutes will continue for centuries to come. 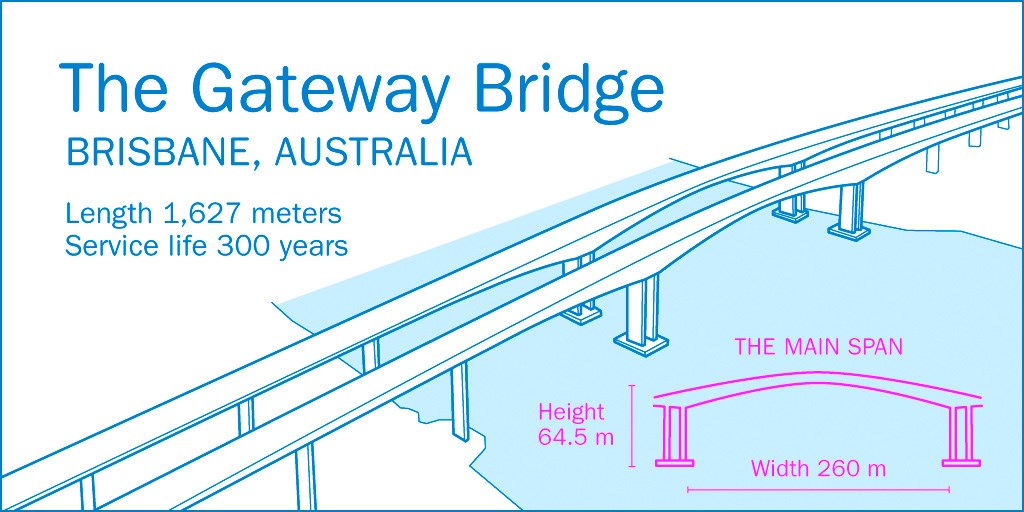